Why to create a new way, a way to Assise ?

Undoubtedly, in this beginning of the XXIst century, Saint François of Assise is an incomparably radiant personality whose concerns are similar to ours, the human fundamental values that many of us call for.

François of Assise is the emblem of those who love nature. 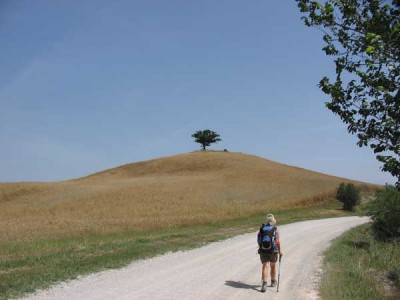 He is a reference for those who aspire to peace, he is a figure of tolerance unanimously acknowledged in the religious and spiritual fields. His artistic and cultural heritage is considerable in Italy, in France and widely in Europe and South America among others.

Saint François of Assise’s name is associated with universal brotherhood and harmony with nature in most people’s minds, whether they are Christians or not.

That’s why François’s fame has always been so great and undoubtedly increasing nowadays. Many events contributed to that phenomenon, in particular scoutism boom with its values based on nature and fraternity among its members.

Those who, today, long for a return to nature are naturally attracted to Saint-François of Assise and often, environment movements quote him.

Jean-Paul II himself proclaimed him “celestial patron of the ecologists” in the beginning of his pontificate, on November 29th, 1979. In a meeting for all the religions in Assise, on October 27th, 1986, the pope reinforced the influence of St-François as a man of peace and fraternity, promoting harmony between very different human beings and even very different ideas and beliefs.

Finally, is St-François an out of date utopist or a prophet of a promising but so improbable future ? (1) There is in fact a strong coherence, an exciting interest that entices to engage in an ambitious project to create  another way across Europe that, for 800 years, numerous Franciscan brothers and sisters have covered through, with the mission of announcing the Gospel, in St-François’s spirit and radicality.